The museum possesses a rich collection of indigenous and migratory birds that live mainly in Greece, Europe and in other continents. Some of them are rare, threatened with extinction and protected, while some others have already disappeared. Due to its geographical position, bordered by three continents, Greece is one of the richest sites in biodiversity. Out of the 475 bird species that are estimated to live in Europe, 436 species thrive in Greece, or they cross it while migrating.
Therefore, the collection of the museum is one of the largest in Greece and will be constantly updated with new exhibits. It has become a magnetic pole, which enriches the knowledge of the dangers that many of the species exhibited face and demonstrates the need to protect them.
Below we present some of our exhibits: 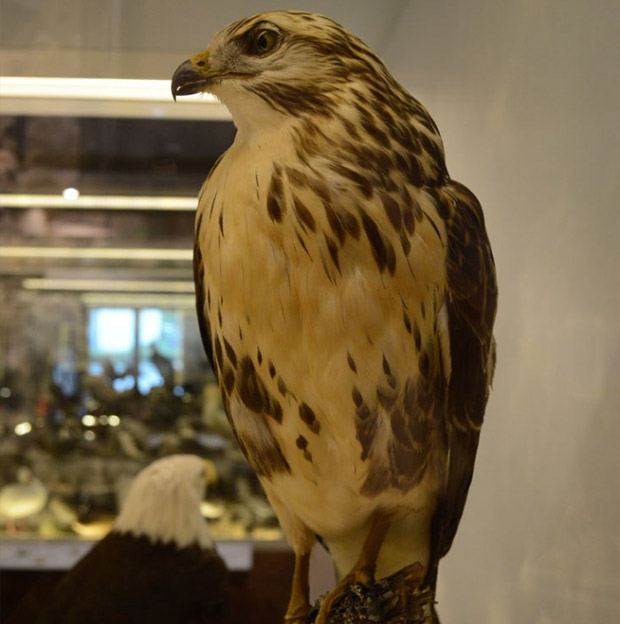 Common Buzzard is one of the most common predators in Greece. It is found in a variety of habitats but needs at least some clumps of trees for nesting and perching - an ideal habitat is the forest edge or a mosaic of open land and forest. The common buzzard feeds on mice, birds, reptiles, and amphibians. Reproduces in forests or trees that are near open land. 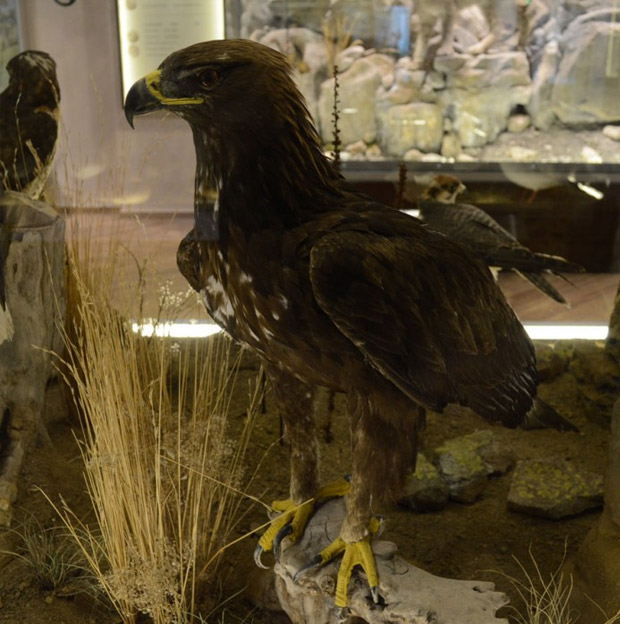 The Golden Eagle is a large eagle in size with long wings and long plumage. It is found in mountainous and semi-mountainous areas of Thrace and Macedonia, in the Pindos Mountains, and in few sites of Peloponnese and Crete. The Golden Eagle feeds on mammals such as hares and foxes, birds, reptiles, and carcasses. In the mainland of Greece, it often throws turtles from above to break their kettle so that it can eat them. It makes a very large nest on cliffs or on large trees and lays 1-2 eggs. Unfortunately, the Golden Eagle is threatened by poaching, illegal use of poisonous baits, and over-hunting of its food. It is considered a protected species. 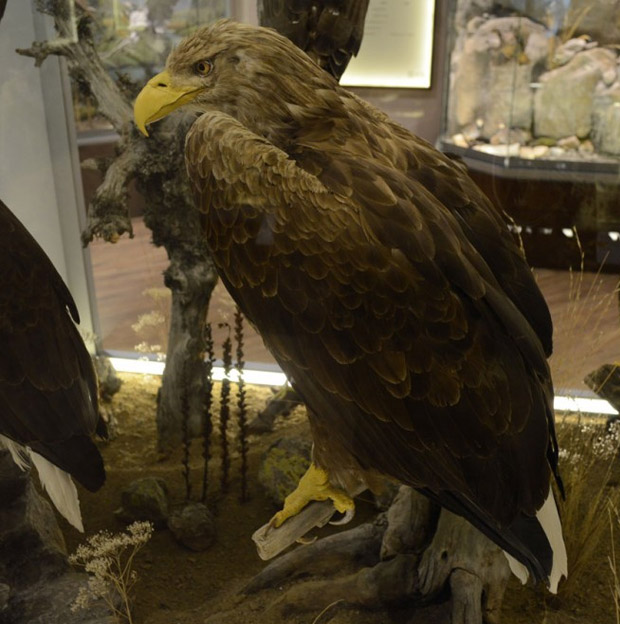 The White-tailed eagle (Haliaeetus albicilla) is found only in large wetlands (river deltas, lagoons, lakes) of Thrace as well as of Eastern and Central Macedonia, in Greece. White-tailed eagle is mainly feeding on fish, aquatic birds, mammals, and carrion and nests in large trees in lowland forests. The species is mainly threatened by the degradation of its habitats (wetlands) as well as by poaching, poisoned baits.

The White-tailed eagle is a protected species. 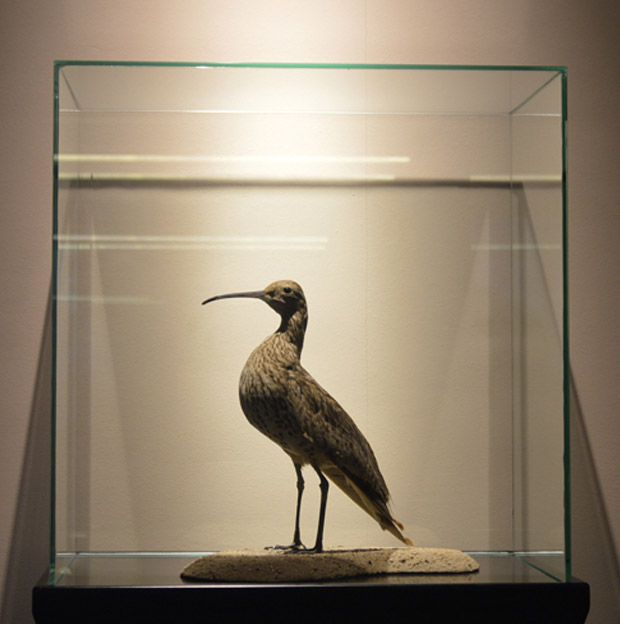 The Slender-billed curlew (Numenius tenuirostris) is one of the rarest and most endangered species in Europe. It is an aquatic bird that nests in Taiga, the northern coniferous forests in the world, and migrates every year from Siberia to central and south Europe and the coastal areas of the mediterranean Africa. In Greece, the Slender-billed Curlew has been observed during spring, mainly in the west and north regions, like Evros Delta, Porto Lagos etc, in lagoons, salt marshes, mudflats, sandy shores. It feeds on insects. It is a protected species. 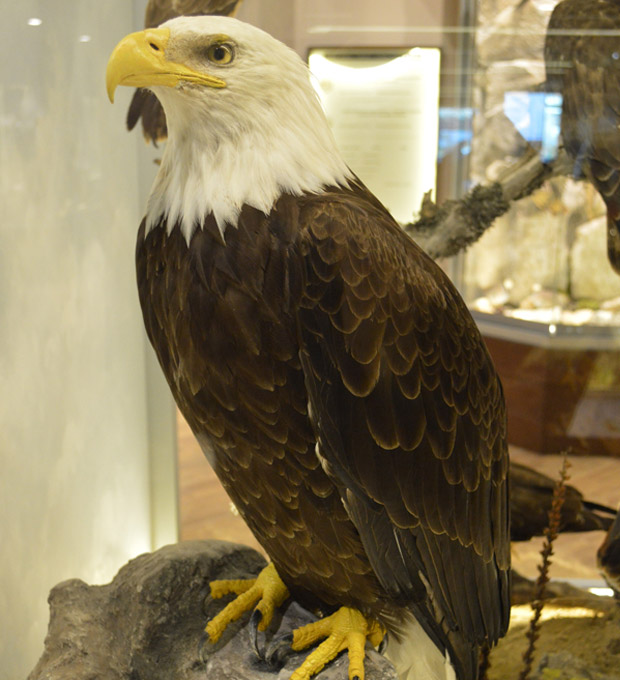 The Bald eagle (Haliaeetus leucocephalus) is a typical eagle with dark brown plumage and white head and tail. It is found in North America near large wetlands and big trees for nesting. Feeds mainly on fish which it grasps with large nails through the water. It builds extremely big nests over the trees, up to 4 m deep and 2.5 m wide. Since 1782, it is the national symbol of the United States. 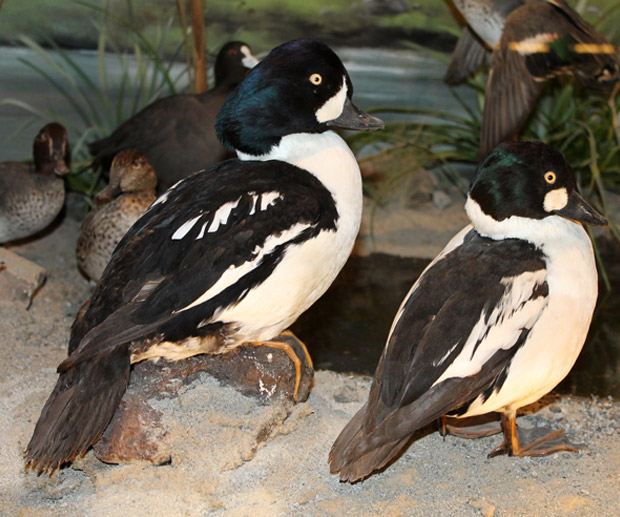 Goldeneye (Bucephala clangula) lives in lakes and rivers of northern coniferous forests of Scandinavia, North Europe, Russia, Canada and USA. During winter, it migrates in southern coastal waters or in open lakes. It can also be found in Greece mainly in the lakes of Macedonia region. It nests in tree hollows and it feeds on aquatic organisms as well as frogs and small fish.Barrow’s goldeneyeBarrow’s goldeneye (Bucephala islandica) nests mainly in forested lakes of North America, but it can also be found in colonies in eastern Canada, Greenland and Iceland. It overwinters along the Pacific Ocean, Alaska and Canada. It nests in tree cavities. It feeds on aquatic insects, plants, snails and shellfish.The most caracteristic difference of the Icelandic, to the left, and the common Goldeneye, to the right, is the shape of the white spots between the eyes and the beak. 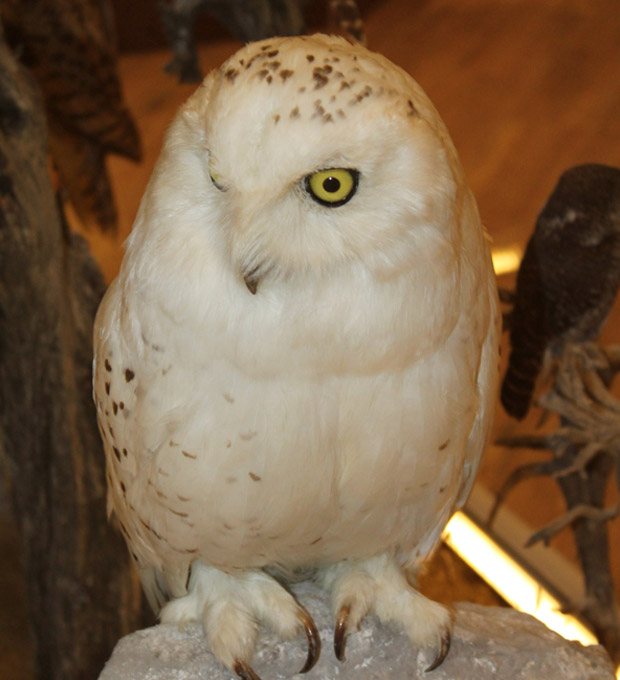 Snowy owl (Bubo scandiacus) is a very strong and large owl with characteristic yellow eyes. The adult male is almost pure white, while the adult female is white with dark spots on the head and the body. It nests in open areas of the Arctic tundra in Alaska, Canada and Eurasia. It is a particularly nomadic bird and frequently found further south, following the preys. It feeds mainly on small mammals, especially rodents, and birds. It nests on the ground and lays 3 to 11 eggs. 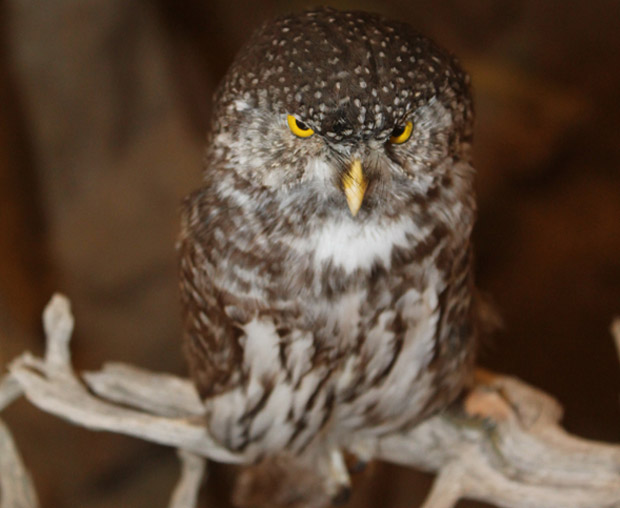 The Eurasian pygmy owl is found in the forests of northern and central Europe and in Siberia. It prefers to live at the feet of the mountains. It is a rare bird in Greece, and it has been observed mainly in the spruce forest of Rhodopes. The Eurasian pygmy owl is the smallest owl in Europe and it feeds on other birds and small mammals. It nests in tree holes or old woodpecker holes and lays 4-7 eggs. 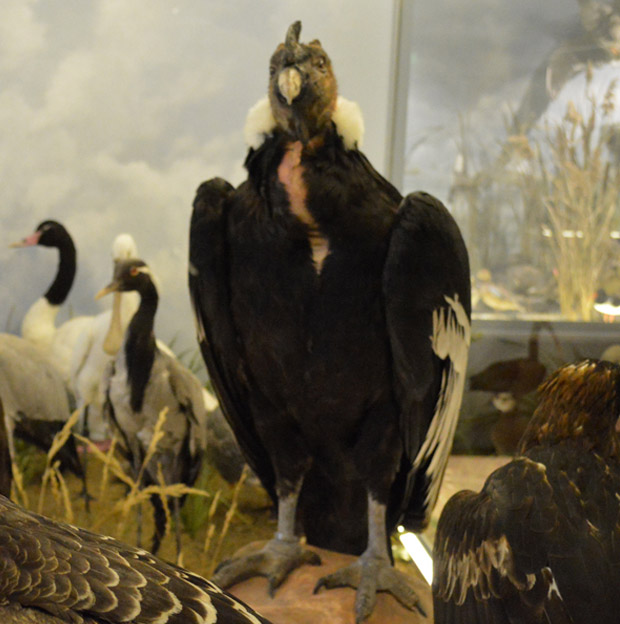 The Andean Condor (Vultur gryphus) is a South American vulture. It can be found in the mountain range of the Andes, the Pacific coastal areas and in South America. It prefers to live in open meadows and alpine areas up to 5,000 m. The male condor has a characteristic dark red caruncle on the top of its head. It lays 1 to 2 eggs. It is the national symbol of Argentina, Bolivia, Chile, Colombia, Ecuador and Peru and it is very common to read about it to the Andean local tales and mythology.It is almost globally threatened species and its population is endangered mainly by human. 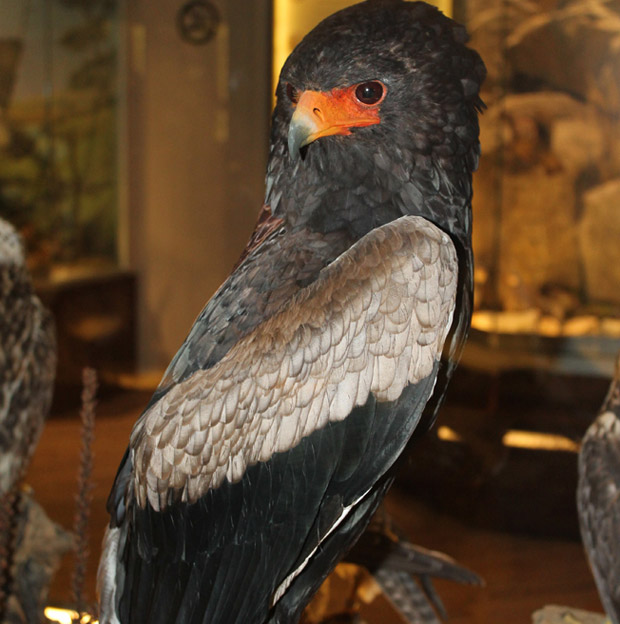 The Bateleur (Terathopius ecaudatus) is a medium-sized eagle. It is a natural predator bird that lives in Africa. Its length is 55 to 70 cm and weighs from 2 to 2,6 kg. The wingspan is 170 to 186 cm. It lives in open grasslands and the savannas of sub-Saharan Africa and parts of southern Arabia. It took its name because of its short tail. It feeds on mammals, birds, reptiles, insects, carrion, and occasionally eggs. It is monogamous and lays only one egg. Threats: The Bateleur eagle is threatened by habitat degradation, agricultural pesticides, and illegal hunting. 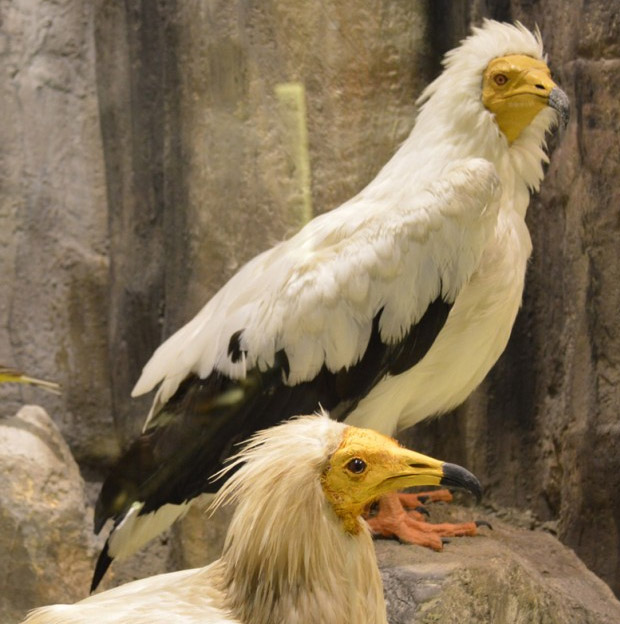 The Egyptian vulture (Neophron percnopterus) migrates to Greece in summer, mainly in semi-mountainous areas in Epirus, Thessaly, Macedonia, and Thrace. Its length reaches 55 to 65 cm, its wingspan to 155-170 cm, and its weight to 2 kg. It feeds extensively on carcasses and small vertebrates, such as turtles. The female Egyptian vulture lays 1-2 eggs. It is a very intelligent bird, uses tools (stones) to break ostrich eggs, and has the ability to pass on this knowledge to future generations.

Ecology: Egyptian vulture numbered about 200 to 250 pairs in the '80s, with its largest concentration in the area of ​​Meteora. Today, its population does not exceed 20 pairs, which makes him a critically endangered species. The main threats to the Egyptian vulture are the illegal use of poisoned baits to control carnivorous mammals populations, and the reduction of extensive livestock that restricts available food. It is under protection.

In our Museum, two Egyptian vultures have been placed in the diorama of Meteora. Both are Victorian specimens, ie they have been stuffed during the reign of Queen Victoria of England. 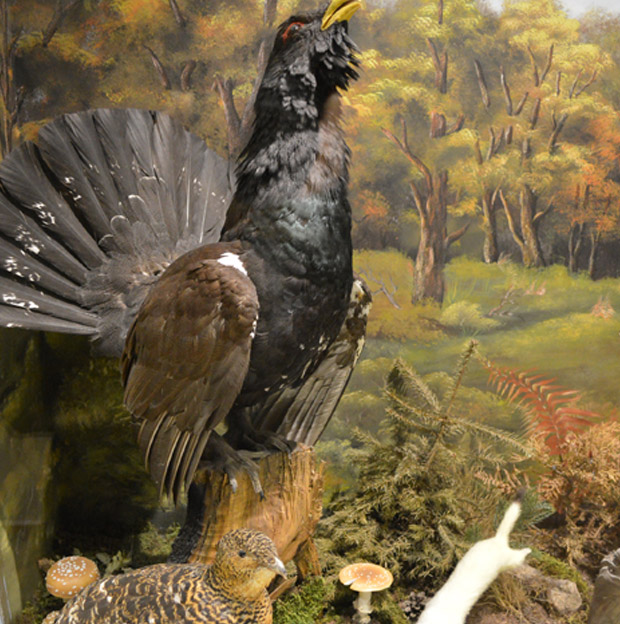 The western capercaillie (Tetrao urogallus) mates in the northern areas of Europe and in western and central Asia. It lives in mature coniferous forests, with the presence of other plant species and small clearings. In Greece we can find it rarely and locally, in mixed forests mainly in Western Rhodopes. The male is much larger in size than the female and has a long tail which opens like a fan to attract the female during the breeding season. In winter it feeds exclusively on pine needles while during spring and summer it feeds on insects and other plant species. The population in Greece is threatened by illegal hunting, opening of forest roads, uncontrolled logging. It is a protected species. 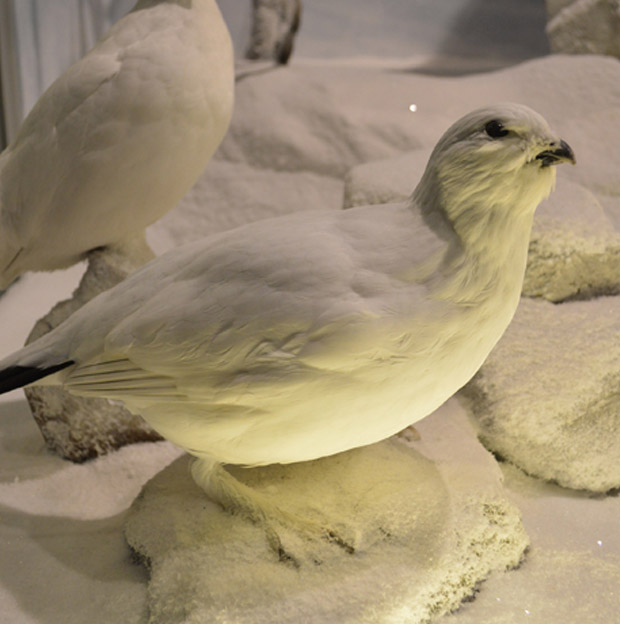 Willow ptarmigan (Lagopus lagopus) is a bird with a characteristically round body and feathered feet. In winter its plumage is pure white and in summer it changes to brown. A resident of cold regions: found in the north woods of birch or pine trees and tundra. It is a herbivorous bird, but the young ones feed on insects.

In the Museum's collection, a pair of Willow ptarmigans in their winter plumage is shown in the Arctic diorama.